Congratulations to CJUK Chef, Chris, who has been recognised as our Chef of the Month for his work in September 2019! 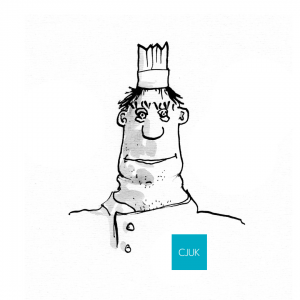 “Chris has worked with us for a number of years and recently took some time out, we’re so glad to have him back! He has a positive attitude and is happy, which is the most important thing. Chris communicates so well with us and plans in advance so it really helps us out, especially in the lead up to Christmas…”

We caught up with Chris to share the good news and ask him a couple of questions about his time in the industry, here is what he said…

How long have you worked in the industry?

How did you get into hospitality?

I was encouraged by my grandmother. She had a career in the industry, spending 10 years as maître d’ of The Ritz London and I used to cook at home with her. My mum also worked as a school cook for 28 years so I’ve always been exposed to the industry. Aged 14, I started a part time job in a local restaurant and it all started from there…

What is your favourite thing about working in this industry?

It’s difficult to pick just one. I love being able to produce interesting food at volume, each day is a new challenge and i’m always learning. There are always new techniques and products to work with, especially with more demand on vegetarian and vegan dishes. Until recently, I’d never worked with Quinoa!

We had an American Footballer at one hotel for about 2 weeks, he came in one night and chose off the a la carte menu and a £400 bottle of wine to go with it. After his meal, the Chef went out and chatted to him, then he asked us to make a cottage pie for the next day as he wanted to try a typical British dish. This wasn’t on the menu as we were a 5* luxury hotel, but Chef agreed. We minced some fillet steak to make it for him and he chose the same bottle wine from the previous night, after he finished his meal, he sent a glass of his wine through to the Head Chef to thank him for going out of his way. That was unusual but great at the same time

Have you ever cooked for a celebrity or well known person?

What is the best job you have ever had?

The best job I’ve had was a hotel called Royal Berkshire, we had a lot of fun there. We had lots of high-end customers who would turn up in Ferraris and other amazing cars so the Chefs  would disappear out of the back door to have a look around the cars and admire them. It was a 5* deluxe hotel but all of the team were lovely, including the Head Chef at the time John and General Manager Harvey who were excellent and encouraging

What three reasons sum up why you work for CJUK?

I’ve worked with CJUK since they were Cummins and Mellor so have seen a lot of the changes, to describe them in 3 points it would have to be that they are patient, understanding and have good places to work. I’ve never had to say “I’m a Chef, get me out of here!”

If you would like to find out more about joining the CJUK Brigade, please call us on 01254 355666 or complete the form below and we’ll be in touch!