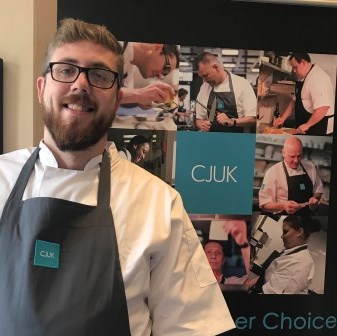 A career in the catering industry as an interim chef was something that I had never considered.

Many within the industry struggle to say “agency chef” without a sneer in their voice and it is a title that is certainly admonished by some that consider themselves serious career-driven chefs.

To say I hadn’t thought of agency chefs in this way would be a lie. During my apprenticeship, despite never having worked with an interim chef, the opinions of the more experienced chefs and the tales they told painted a picture that made me feel lucky to have never worked with one.

Transitioning from being a chef to working in the CJUK office, however, has certainly allowed me to view the industry, and agency chefs, in a new light.

Tales told of interim workers often star cowboy chefs who don’t know their soufflé from their brûlée, but this hasn’t been my experience working with CJUK.

Many of the Elite Chefs in the CJUK brigade have had fruitful careers in the industry but have taken a step back in order to spend time with their families.

Dealing with these (CJUK) chefs on a daily basis has certainly opened my eyes and I have come to understand why many of the chefs I talk to have committed to interim work with CJUK as a full-time career.

Most obviously there is a serious financial incentive. Agency chefs enjoy being paid for every hour they work which is something of a novelty in the world of catering. Having all their hours paid for means that it is perfectly possible to earn a good wage doing 40 hours a week rather than 60, 70 or even 80 hours.

For those willing, there are still opportunities to work 60+ hours a week but all it means is a bigger pay packet. Pay is one of the most common complaints I’ve heard among chefs but isn’t something that agency chefs have to complain about.

I have begun to wonder whether some of the stigma around agency workers, in some part, stems from jealousy.

Fiscal benefits aside, relief work can often help re-establish the crazy work-life balance that is a common side effect of being a chef. The long hours and late nights translate into a warped social life, plenty of cuts and burns, alongside an unhealthy dose of stress.

Being an agency chef, in particular being a CJUK chef, offers a distinctly healthier and sustainable alternative to a permanent role as a chef.  Control over their work life affords more quality time with their partners, children and friends and this allows them to sustain their passion for cooking without burning themselves out.

Unfortunately, these aren’t the agency chefs that get talked about. Being such a close knit industry it is easy to understand how horror stories travel fast and, although unfortunate, it is certainly understandable.

A story about a chef turning up drunk is far more interesting than a story about someone that turns up on time and does their job.

There will always be good and bad staff in any industry but agencies can have an effect on this. With many members of the team joining from hospitality backgrounds, the uniqueness of CJUK is that they understand the industry.

By searching for the most professional, committed chefs who consider interim work a serious career choice, CJUK are repairing the damaged reputation of agency chefs nationwide.

They are supportive, understanding and work incredibly hard to make sure both the candidate and client benefit.

Experiencing the effort that goes into the CJUK chefs behind the scenes, and being able to appreciate the bigger picture has certainly improved my opinion of agency workers.